After finishing on top of the ladder at the end of the 1967 home-and-away rounds, Richmond squared off against Carlton in the second semi-final at the MCG, for the precious prize of direct entry into the Grand Final.

Not one member of the Tigers’ team that September Saturday had experienced league finals football before and, as a result, the Blues went in as favorites.

Unfortunately, it was a controversial incident during the third quarter of the match, that dominated the headlines for the ensuing few days, and is still a hot topic of conversation in the football world five decades on.

Former Richmond captain Neville Crowe, a triple Best and Fairest winner with the Club, and still a top-class ruckman, despite being in the twilight of his illustrious playing career, was reported by boundary umpire Ron Fitzgerald for striking his Carlton counterpart John Nicholls with a right clenched fist. 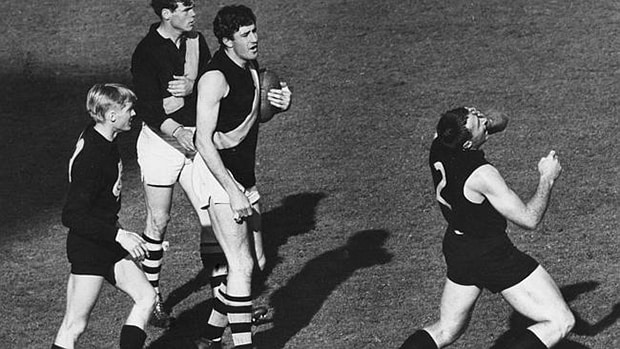 Elliot Cartledge, author of the superb book, ‘The Hafey Years’, outlined how the dramatic events leading to Crowe’s report unfolded . . .

“With field umpire Sheales’ back turned, Nicholls threw a short right with a clenched fist into Crowe’s belly, who then stood tall, ball tucked under one arm, and attempted to slap his opponent in the face.  His open-handed swing missed.

“Nicholls clasped his left hand to his face and reeled backwards like a town drunk.  Having paid a 15-yard penalty to Crowe and starting to move away, Sheales only saw the aftermath of Nicholls’ performance.  Crowe was subsequently reported for deliberately striking by Fitzgerald.”

It was the first time in 150 games that Crowe, 30, had been reported, and the incident attracted huge publicity.

With video evidence not part of tribunal hearings back then, Crowe’s innocence or guilt would hinge on his and Nicholls’ testimony.

At the tribunal on Tuesday night, Crowe said, in his evidence, that he was awarded a mark by umpire (Peter) Sheales, and was restrained by two Carlton players while on the ground – one of them being Nicholls.

“After I had struggled to my feet, the Carlton player continued to hold me, and I made a forward move with my right hand,” Crowe said.

“It was not a clenched fist and very little, if any, contact was made.  If there was any contact at all, it was very slight.  It was not my intention to strike Nicholls . . . It is not in my make-up to clench a fist and strike a player.”

Crowe subsequently claimed that because of an injury to the little finger of his right hand, it was impossible for him to completely clench his fist.  He added that he wore a plaster cast on the finger during matches.

Tribunal chairman Alf Baud then asked Crowe to demonstrate exactly to what extent he could close his fist.

Umpire Fitzgerald, in his evidence, said Sheales had awarded Crowe a mark and penalised Nicholls 15 yards after he’d been struggling for possession of the ball.

Fitzgerald said that as he ran in to separate the two players, Crowe stepped back and struck Nicholls with his clenched right fist.

“I was only 10 yards away,” Fitzgerald said.

“Nicholls fell to the ground holding his face.”

Field umpire Sheales said:  “I did not see the incident.  Crowe was manhandled after he took a mark and players rushed in.  I awarded a 15-yard penalty and as I walked to the 15-yard mark I heard a bit of a roar.  I looked around and saw players coming in again.  When I sorted things out I found boundary umpire Fitzgerald had reported Crowe.”

Nicholls said in evidence:  “I don’t remember the incident very clearly at all.  From what I remember I think there was a scramble and a free kick or mark was given.  I remember him (Crowe) on the ground and I grabbed his arms.  I’m not too sure what happened after that.  My memory is not too clear.  I remember clearly I was retarding Crowe to stop him handballing.”

Following a lengthy hearing, the tribunal found Crowe guilty and suspended him for four weeks.

Understandably, he was shattered with the decision that meant he would be unable to take his place in Richmond’s Grand Final side.

The police had to be called to control the angry crowd that had gathered outside of Harrison House, where the tribunal hearing took place.  Nicholls was advised to leave via the rear exit.

After Crowe had solemnly informed the assembled media, ‘I can’t talk now’, the Richmond president, Ray Dunn, provided the official Club view of the controversial events that had transpired . . .

“There will be no protests or complaints from us,” he said.

“It is very disappointing for a player who has not made a mistake in his life to be found guilty the first time.  I would say this is the greatest blow Neville Crowe has ever suffered.  But he is a man and he will take it like a man.  We will still win the premiership, despite this crippling blow.”

Crowe never played league football again after copping that four-match suspension.  He announced his retirement at the end of the year, due to expanding business interests.

Many years later, Crowe opened up about the Nicholls incident in Rhett Bartlett’s book, ‘Richmond FC:  A Century of League Football’. . .

“The interesting thing is I’ve never blamed John Nicholls for what happened on the ground – that was professional.  He attempted to get the ball back after I received the free kick; he wrestled me and put me in the bear hug and Peter Sheales the umpire whistled the 15-metre penalty.  But while the wrestle was on, and you can actually see him rip a right into my stomach and I’ve just sort of stepped back and thrown an open hand that has missed him . . . and over he has gone.

“Now all of that, up until then, is professional.  But then he let me down at the tribunal and lost his memory.  There is a touch of bitterness attached to that.  The reason was simple; he wouldn’t want me around if we played them in the Grand Final . . .

And he said, ‘Could that be as a result of the blow that Mr Crowe struck you?’  And he just shrugged his shoulders.  And I felt the blood drain out of my face!  I thought, I am a shot duck here.  And, sure enough, the boundary umpire, who came from the wrong direction and saw the wrong thing, put two and two together and got five, and I got four weeks.  That was the end of that . . .